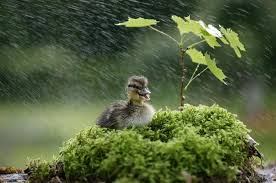 A Contemplation of Rain and Ducks

The rain kept on raining. Geraldine kicked at the puddles.

“Fuck this weather,” she said. “Fit for fucking ducks.”

A drake mallard waddled onto the pathway.

“No idea what you’re saying.”

She flicked the rain drops off her plastic rain coat and sat on the seat overlooking the pond, grinding her heels into the sodden mud beneath her feet.

“Vous ne parlez pas le francais?” The duck settled itself down on the path in front of her with a ripple of wing feathers.

Geraldine pulled her Thermos from her coat pocket and poured the room temperature merlot into the metal cup.

“Me thinks you are in need of company,” the duck said.

“Me thinks you can fuck off, duck.”

“Call me Harold,” Harold advised. “Duck is so general.”

The smooth wine hit the back of her throat with a satisfying kick.

“Speak anything other than French?” Geraldine asked.

“But of course,” Harold said. “I speak English.”

“I’d have thought that was quite enough for a duck.”

The rain started again, great dollops of it thumping down on the ground, sending out coronas of mud. It gathered in the turn up of her hood and dribbled down the side of her cheek.

“And now you are crying,” Harold said.

Geraldine tsked and shook her head. Other ducks drifted round the pond, feathers slightly ruffled, necks concertinaed into their bodies while shrapnel rain water blasted around them. Even the ducks, for whom this weather was fit, weren’t enjoying the day. Geraldine took another sip, wondering whether the wine would mellow her or whether it would grip at her stomach and prance round her head.

“Do you have nothing to say to me when I’m making such an effort to be companionable?” Harold asked.

She shook her head. The duck looked affronted.

“A plain little duck? Harold le petit canard?” He turned his head away.

Shit, even a duck could make her feel guilty.

“I’m not going to call you Harold,” she said. “That’s just madness.”

Geraldine sipped her way through a cup of wine, and as she did so she considered the rain and the clouds and the prevailing wind conditions. And as her second cup emptied, she found herself musing on the accuracy of weather forecasting using seaweed and fir cones, which morphed, for some reason, into a contemplation of the last successful invasion mainland Britain.

“Are you taking the piss, by any chance?” she asked the duck, who had sat silently throughout.

“Coming over here and speaking French. Is that in anyway trying to rub my nose in the history of this island?”

“One who speaks French.”

“And English,” he reminded her. “For us that is normal. We travel far.”

Geraldine shrugged. That did make sense.

“So,” Harold asked. “Now we’re speaking, why the sadness?”

Geraldine glanced behind her.

“How could I possibly tell a duck?” she said.

“No one else here to tell.”

Again, there was irritating logic in the duck’s words.

“Would it cheer you up if you could call me whatever you like?” he asked. “The Harold thing is just an affectation. I’m not that married to it.”

Retreats bookings are now open. Our next retreat takes place in January. Dismiss