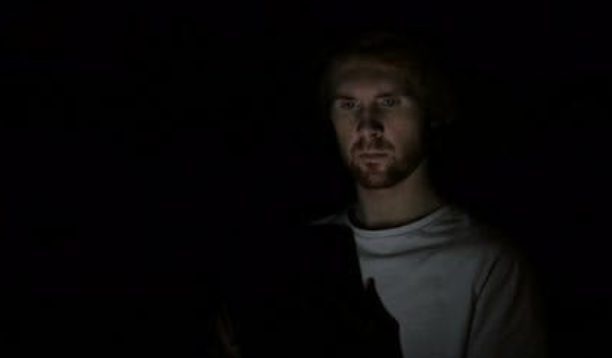 The Skin of the Dark

Izal medicated toilet paper. Furry dice. Liebfraumilch. People who still think it’s witty to write ‘I wasted 90 minutes of my life watching this, and I’ll never get it back’ on film forums. Multi-centenarian Derek The Tangerine Baboon Derekson, luminous on daytime TV, surveying antique knick-knacks with rehearsed interest. What do they all have in common? They’re still here. Scratch that. Izal stopped arse grater production in 2016 according to pet-hates.com.

Harry still has a roll in its original packaging, a joke present to her for her 50th. (She got a fortnight in Sicily too, he wasn’t that much of a twat.) He’d bought it at a Brighton fair from a trader who clearly thought: easy mark. Five quid and he’d haggled.

It’s 3.20am. Harry stares at the laptop screen. Partially obscured by a huge pause button, Derek is frozen in time trying to muster some excitement about a chipped Toby jug. His DayGlo face pierces the dark of Harry’s bedroom.
Ten minutes before, Harry had thrashed his way up from the depths of a clammy dream and woken in a caul of sheets.

In the dream, she’d been lounging on the sofa. Double doors opened to the river far below. Sun sliced the room in half. Her feet were tucked under her and she was in her good space, frizzy hair everywhere bouncing light, head back, laughing from the gut up.

So he went to hold her because he lived for that energy and still wanted it. But as he tried to fold his arms around her, she shrank, and her hair became filaments that sparked then burned white. The tighter he squeezed, the smaller she became, like trying to catch rain, until she was tiny and sitting on the palm of his hand and looking up at him. She’d said: ‘I’m not going to die, am I?’ and it was plaintive and final and unanswerable.

He shuffles the laptop on his knees, closes the browser and his magnum opus pops up. He cuts a word, restores it. Six lines so far.

Sweats her out each night
with a crisp, cold white.
Wakes next day,
still he’s prey.
She’s back again
in the mourning.

Jesus, it’s doggerel. File under Liebfraumilch? He decides to decide when he’s fresh tomorrow. But it’s already tomorrow…There’s always the trusty all-night reruns of programs nobody should ever have watched when the world was awake: double-barrelled interior designers fucking up awkward TV virgins’ kitchens with Xeroxed découpage or, if he’s really lucky, a perky Dig It! presenter plunging 1997 hands deep into a pot of moist peat.

He reopens the browser and increases the volume. Cookies have kindly remembered the exact point he left the action. The tangerine baboon antiques guru has moved on from chipped Toby jugs. He’s now looming over a frail, impeccably dressed gent from Rainham who is considering an offer of twenty-five pounds for his late wife’s lifelong curation of vintage toilet seat covers.

‘I’d take it if I were you,’ says Derekson. ‘It’s a bobbydazzler deal.’

The old man hesitates, teetering towards apology, then says firmly, ‘No, I think I’ll keep them.’

The sheet is a sloughed lizard skin under Harry’s bum. He rolls out of bed, pulling it with him, rolls it into an armful of a ball. It smells hot night acrid and it’s damp with a week of sweat. He heaves the sash window up as far as it will go, till it sticks. Takes a few steps back, aims, then hurls the ball through the gap and into the slate sky. It unfurls immediately and billows in the gentle breeze down into the valley. For a moment, it’s a jellyfish parachute floating over street lamps and tucked-up families safe under cover. Then it collapses in on itself, and plummets. It’s a sheet again. Just a sheet, caught in a tree. But it’s there, not here. And that’s something.